The HarperCollins author of the fitness book ReSYNC Your Life Samir Becic and the HFR team is bringing your our list of the 10 Fittest Hollywood Actors. These celebrities are household names and we chose them in order to motivate everyone to be healthier, fitter, and more balanced.  We chose them based on their fitness levels and body type- we recognize that not everyone is built the same with regards to their heritage and cultural background. We made sure that all of them use natural means to be healthy and fit!

We first researched all the available data on popular actors online and narrowed it down to 100. Then, we did more extensive research to narrow it down 50, 25, and then finally 10. We used a combination of interviews, internet, library, industry literature, and Samir Becic’s knowledge of over 33 years in athletics coupled with his experience as 4 times Number 1 Fitness Trainer in the World.

The following was all taken into consideration: fitness level, nutritional habits, age, their own medical issues and how they coped with them, and involvement and promotion of healthy lifestyle in general. Here are the Top 10 from HFR team and author of the book ReSYNC Your Life Samir Becic: 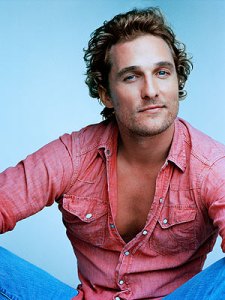 Matthew is a busy father of 3, but he makes time to workout- even at home! A typical workout consists of pull-ups on the kids swingset, sprints in the backyard, and free weights. He is also a fan of mountain biking and surfing because he likes his workouts to be as mental or spiritual as they are physical.

”Sometimes you can get the body in shape, and the head ain’t in great shape,” he says. “But it’s real nice if you can coordinate ‘em.”

His trainer even attributes his youthful appearance with the fact that he keeps training year-round and not just for roles (as many actors in Hollywood do). McConaughey’s active lifestyle is matched by his love of healthy food. Because fitness plays such a big part in his own life, he started the non-profit organization j.k. livin foundation, which funds an after-school fitness and wellness program for some of the nation’s most vulnerable inner-city teenagers. The foundation’s name is shorthand for “just keep living,” a personal mantra inspired by the passing of his father. 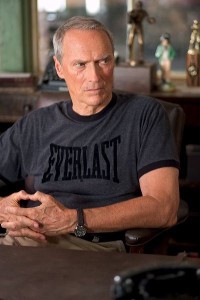 Eastwood, a lifelong non-smoker, has been conscious of his health and fitness since he was a teenager, and practices healthful eating habits, even into his 80s. He practices daily transcendental meditation, and is renowned for being an obsessive health and fitness nut.

“I’d always done muscle-training exercise,” Clint says, “things like chins, clips and calisthenics, but it was when I was in the Army that I discovered the weights – the kind of training you’d call bodybuilding today. I never wanted to build huge muscles and bulk up like a competitive bodybuilder, but I realized very quickly that the best way to keep your muscles strong, hard, and fit was with weight training. And once I got into weight training, I never gave it up.”

Eastwood maintains a low-fat, high protein diet and gets plenty of sleep. Everything in moderation, nothing in excess. Some cardiovascular exercise, some muscle training. Eating healthy food and watching your weight. And exercise and attention to diet, Clint Eastwood believes, should be a lifetime habit, best begun when you are as young as possible.

“Stay away from carbohydrates, especially rich desserts. Keep a scale in your bathroom. Get proper rest. Try to be optimistic. Eat fruits and raw vegetables. Take vitamins. Skip beverages loaded with sugars. Avoid alcohol in excess.” 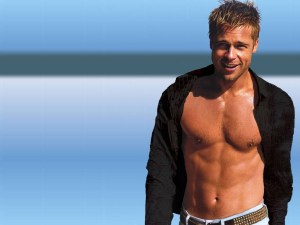 “I believe you make your day. You make your life. So much of it is all perception, and this is the form that I built for myself. I have to accept it and work within those compounds, and it’s up to me.”

From being featured in movies like Fight Club and Troy, Brad Pitt knows a thing or two about staying fit and obtaining lean muscle mass. Looking at Brad’s physique, it is obvious that he didn’t get that way eating burgers and fries. He stays away from dairy and fried foods, and processed foods like bleached white flour, soft drinks, pastries, and fruit juices. His training routine consists of focusing on a different muscle group each day of the week and finishing off the week with cardio on rest days. 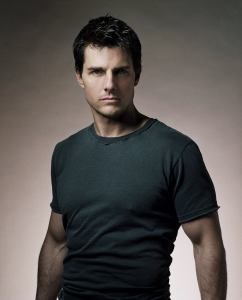 Tom Cruise works out everyday- even when he’s off, he’s either hiking, biking, flying planes, or riding a motorcycle.

“I train pretty hard,” Cruise admits. “For ‘The Last Samurai (2003),’ I spent a year training six hours a day, seven days a week to be able to handle a sword and do it on uneven terrain, because I didn’t want to blow my knees out.”

Cruise, who is 51 years old, is known for doing a lot of his own stuntwork in his action films, which means he always has to maintain peak physical strength and endurance with functional muscle. In addition to following a strict diet and lifting weights several hours a day, Tom also does cardio daily.

Will Smith, 45, has maintained his physique during his tenure in hollywood. His regime includes running 5 miles 6 days a week, and lifts weights on two body parts 5 days a week. Since training for his role in Ali as the iconic boxer, he still incorporates boxing training twice a week because he feels it is such a great workout.

He aims eat 6 to 8 high protein meals a day which he often supplements with protein shakes to save time. Although he is known for having a sweet tooth, he tries to limit his carbohydrate intake, but says he cheats once a week.

Ryan Reynolds, 37, takes his shirt off in almost every movie he’s in, whether it’s a comedy, or an action hero adventure. He admits to living like an unhealthy “frat boy” in his youth, but credits his role in Blade: Trinity for changing his life, and his training. For the role, he trained six days a week, and ate a 3,200-calorie daily diet in order to gain 25 pounds of muscle.

“That time changed my life because it taught me you can actually do things that were previously impossible,” he says. “I now train because I like being healthy and I enjoy it a lot. I’m at my happiest when I’m outdoors, walking in the woods or hiking. I like to try to incorporate those kinds of activities into my morning routine. In some ways, it’s like meditation.  “

He enjoys fitness so much that he even pushed himself to train for and run the New York City marathon in a time of 3 hours, 50 minutes. Reynolds also sticks to healthy home-cooked meals such as 97% fat free bison bolognese with fresh ingredients over brown rice.

“Nutrition is everything. Everyone thinks getting in shape is 80% working out and 20% diet, but really it’s the other way around.”

“Well I do a lot of aerobics, a lot of dance, there is a lot of jazz-ercise, the ab-master, there’s the butt-blaster or whatever it’s called. And also there is a lot of yoga. And I have also just finished doing a movie where I did football with a bunch of 21-year-olds which I highly recommend. That’s going to keep anyone in shape.” George Clooney, 2007.

George’s diet primarily focuses on healthy food. He recently decided to go on a juice cleanse and eat better as part of his New Year’s resolutions, having green juices and salads daily.

Jake has admitted that working out has become a bit of an addiction to him and he has to remind himself to slow down. For his physical role in Prince of Persia, Jake trained in parkour, sword fighting, and bulked up in muscle. Even after filming wrapped, he continued a 45-min, 6 day a week workout routine that alternated strength conditioning and cardio.

“I really just do it for myself,” he said. “It’s just an incredible thing to exercise, but for it to become like a meditative thing rather than just working out is amazing and that’s how it is for me.”

He finds dieting extremely difficult because he enjoys eating good food so much, but when he’s training for a role that requires him to be lean and muscular, he will diet and eat lean meats and vegetables.

At 39, Bradley Cooper is definitely Hollywood A-list and known for being in great shape. His top 5 fitness tips are: super-set exercises to failure, don’t cheat on your diet for at least 6 weeks while your body detox’s, drink protein shakes- but make sure they are quality, stay focused, and drink A LOT of water.

“Staying focused on your goal helps you get through workouts and keeps you from cheating on your diet. Put a picture of what you want your body to look like in your kitchen. It’s a constant reminder where you need it most.”

Here is what Cooper says about detoxing the body by eating right:

“For at least six weeks. It’s vital you allow your body to rid itself of toxins and keep your hormones at optimal levels. Sugar and processed food cause your body to respond in a way that prevents proper muscle growth.”

Matt Damon has gained and lost his fair share of weight over his career. His recent role in Elysium

His favorite workout, however, is sprint drills, because they are fun to him. He says:

“Try to find something you can improve at, because that will keep you doing it. And that will make it fun”

When training, Matt Damon eats 6 meals a day, divided into 3 larger meals and 3 smaller snack-like meals in between each.  His total calories are broken down as such: 40% from protein, 20% from fat, and 40% from carbohydrates. He does, however, admit that extreme diets become more difficult on him as he gets older- and only adheres to strict diets when he needs to for a role.

Read more of our Top 10 Articles

5 Way to Stay Hydrated in the Summer Heat

How to Safely Protest During COVID-19

5 Ways to Stay Active and Safe as States Begin to...

Health Fitness Revolution - June 4, 2020
0
During the past few months, the coronavirus (COVID-19) pandemic has quickly rerouted many people’s lives in unexpected ways. Months ago, nearly all...

5 Way to Stay Hydrated in the Summer Heat

How to Safely Protest During COVID-19