Samir Becic and the Health Fitness Revolution team is bringing your our list of the 10 Fittest Singers.  These celebrities are household names and we chose them in order to motivate everyone to be healthier, fitter, and more balanced.  We chose them based on their fitness levels and body type- we recognize that not everyone is built the same with regards to their heritage and cultural background. We made sure that all of them use natural means to be healthy and fit!

We first researched all the available data on popular singers online and narrowed it down to 100. Then, we did more extensive research to narrow it down 50, 25, and then finally 10. We used a combination of interviews, internet, library, industry literature, and Samir Becic’s knowledge of over 33 years in athletics coupled with his experience as 4 times Number 1 Fitness Trainer in the World.

The following was all taken into consideration: fitness level, nutritional habits, age, their own medical issues and how they coped with them, and involvement and promotion of healthy lifestyle in general. Our picks our listed in no particular order: 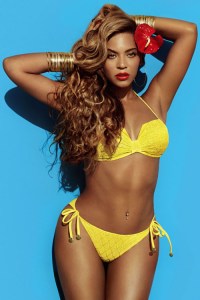 Many women love Beyonce because she looks real. She has envious curves, but is still very toned and healthy- and makes no secret of having to work for it.

She recently went 22 days Vegan with her husbdand, Jay-Z (which we wrote about here) as a health experiment. In terms of her workouts, she tries to fit in as much as she can into her hectic schedule by interval training, alternating between sprinting and running while on the treadmill, to burn more calories in a shorter amount of time. To tone, she does exercises that work several muscle groups at once; she’s also dancing regularly as practice for her physically rigorous concerts. 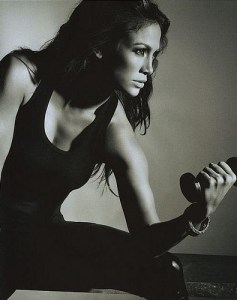 This beautiful 44 year old Latina woman knows about being active and fit! She began her career as a professional dancer and has maintained her fitness since then. In terms of her fitness routine, she varies her cardio so as to not get bored and believes that there is nothing better than your own body weight to help you lose or shift fat.

“Having twins changed my body. It feels different on the inside as well as the outside. The texture of my muscles has even changed. I feel like I’ve hit my stride in my 40s. In my 20s I knew nothing about taking care of my body but now I’m 41, I feel like this is the age. I think women are looking after themselves more than ever.”

In terms on nutrition, she does not believe in starving herself but follows a regimen that ensures she eats the right things at the right time. She also drinks a lot of water daily. 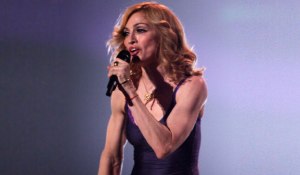 53, Madonna is a living entertainment legend, now even owns a chain of fitness gyms worldwide and is not shy about her own rigorous training and diet. Madonna possesses a level of commitment to health and fitness that most people can’t even imagine. It takes dedication to exercise, nutrition (she eats a macrobiotic diet), and sleep. Her focus in training is on strength at a cardio pace.

“No matter who you are, no matter what you did, no matter where you’ve come from, you can always change, become a better version of yourself.”

Madonna specifically moves through a lot of strength movements at a steady, unforgiving pace in addition to yoga, pilates, and hours of dance rehearsals daily.

Justin told Playboy in 2011 that he prefers to have a toned body rather than look like a meathead. He not only workouts in gym but also does rigorous dance training when he tours and participates regularly in snowboarding, basketball, and gold. He is married to our Jessica Biel, who also made our Top 10 Fittest Celebrities List 2014 and they are often seen jogging together and hiking with their dogs. He does not believe in doing exercise every day so he workouts around 4-5 days a week and when he needs to diet, he cuts out high carb beer. Outdoor games help him to maintain his body shape  and provide excellent cross training in order to maintain his all around toned, strong body. He has been quoted as saying:

“I’ve done well, but the reason is pretty simple: I’ve worked my *ss off,” he says. “Anything I’ve done well has taken many, many hours of preparation.”

This applies to his work ethic in general but also his fitness training.

At age 46, Tim McGraw has maintained a 40-lbs weight loss in his 40s. He states his motivation for getting fit is to be able to perform in front of his fans, have energy, and feel good- he even quit alcohol. He has said he works out around 4 hours a day when not preforming, using pulleys and bars and doing core training, while incorporating strength and balanced movements to build up the muscles between the ribs and connective tissues.

“The reason you want to do this is to be in front of thousands of people, playing that guitar and doing what you love. And when I’m on stage, I want to feel good.”

He does, however, admit that he enjoys occasional indulgences such as a burger or sweet tea- but does an extra hour of working out to counterbalance the extra calories.

This 5’10” young country phenomenon credits running, hiking and dance workouts for her lean, toned body. She loves partaking in workouts that don’t feel like exercise but said in 2012 that she ran for an hour every day on the treadmill no matter what, saying she relied on rigorous exercise to keep her stamina up. The blonde beauty also said exercise quelled her anxiety. Taylor has said

“I don’t care about losing weight as much as feeling good about myself. You can’t indulge without exercising, so I exercise because I love eating and I don’t want to have to live without anything.”

She eats really well during the week, including lots of salads and yogurt, and indulges a bit on the weekends.

Britney has had some ups and downs over the years, but it seems that since announcing her Las Vegas residency, she has taken her health and fitness up a level.

“The [Vegas] performances won’t be simple … a massive party from start to finish, and to pull this off, I have to be in top condition and running at full speed.”

Her trainers have all called her an exceptional athlete and those that work with her says she is relentless and energetic during the grueling, long dance rehearsals. In addition to rehearsing 5-6 hours a day, she trains with a trainer in brief but intense 30 minute sessions that can be anything from boxing to climbing a fence so that she doesn’t get bored. Her nutrition has also improved as she’s gotten older- while she used to be a notorious cheeto fan, she now eats several well-balanced meals throughout the day to keep her energy levels up for her almost daily 2 hour show.

Tina Turner, at 74, seems to just get better and better with age – a phenomenon the singer believes is down to a combination of great style, health and attitude.”A 50-year-old woman is equivalent to 40 when I was growing up,” she insists.

“If you take care of yourself, 60 is nothing for women these days. In today’s world you can be the kind of woman you want to be.”

The legendary singer- who has stayed a size 10 for the past 4 decades- puts her stable size down to not eating after 6pm, drinking lots of water and, of course, dancing. She says she stays away from sweet and prefers to eat healthy foods because of how they make her feel. Her daily breakfast consists of banana, kiwi and melon, and brown German bread. In addition, she believes sleep is so important that she only has two meals a day because she sleeps so long. With a home in Switzerland, she has become a devotee of saunas and steam rooms and “walking 10 miles up and down stairs at home”. It is Tina’s mental attitude that perhaps plays the biggest part in her refusal to let herself go- she believes we are what we think and that women need to embrace themselves at every point in their lives!

At 67, Cher has no intention of slowing down. As for how she maintains her slim physique, Cher is brutally honest, admitting it takes a strict diet and rigorous workouts.

“You have to work twice as hard,” she told E! “You have to be in the gym all the time, but I like it. When I was young I was a tomboy. I played sports. And I’m learning to surf right now. I like that kind of stuff, thank God.”

Currently, one of Cher’s favorite workouts is playing tennis on Wii. And we love that she appreciates the importance of fitness throughout a lifetime. She has said “I’ve been screaming at the top of my lungs at my family, ‘Work out! Work out! Old age is coming!’ At some point you will need the strength. Who would have ever thought you would get this old?”

She’s known for her dancing and great energy, but how does she stay in shape? She says her #1 fitness is dancing, it keeps her in shape and she is so intense about it that she has been referred to as the drill sergeant. In addition to dancing, she goes for a 30- to 45- minute jog twice a week and a lot of circuit training in the gym. She alternates between a few minutes of cardio to sets of 12 on each exercise. Her favorite exercises are one leg dead lift squats and bed-overs using 10 pound weights.

“I used to diet a lot and now I don’t believe in them because you’re going to binge, your metabolism gets messed up and then your weight is going to yo-yo. I did that for a long time, but now I eat 6 small healthy meals a day.”

Although she has said she doesn’t believe in diets or depriving herself, she does snack healthy on yogurt, raw cashews and cherry tomatoes.

10 Things You Should Look For in a Probiotic

Health Fitness Revolution - May 30, 2020
0
The world is full of cultures and foods, and people say one of the best ways to travel is by trying different...

10 Things You Should Look For in a Probiotic