Samir Becic and the Health Fitness Revolution team have put together a list of the Fittest Governors in America. Regardless of party affiliation, it is important that our leaders demonstrate healthy lifestyle and physical fitness.  Healthy Body, Healthy Mind- we want our leaders to be healthy!

We first researched all the available data on the American governors online and narrowed it down to 20 from the 52 currents governors. Then, we did more extensive research to narrow it down 15, 12, and then finally 10. We used a combination of interviews, internet, library, industry literature, and Samir Becic’s knowledge of over 33 years in athletics coupled with his experience as 4 times Number 1 Fitness Trainer in the World.

The politicians on this list not only lead healthy lifestyles themselves, but also promote within their leadership roles to their constituents. We will note, however, that out of all of our Top 10 lists, this was the hardest to make because of the lack of information that many governors put out about health and fitness. Many governors did not make this list because although we could tell they are extremely fit themselves, they do not promote health and fitness on their states agendas. We hope that this list encourages more governors to make health and fitness a priority within their states- not only for the well-being of their constituents, but also for the economic benefit of having a healthier workforce.

The following was all taken into consideration: fitness level, nutritional habits, age, their own medical issues and how they coped with them, and involvement and promotion of healthy lifestyle. 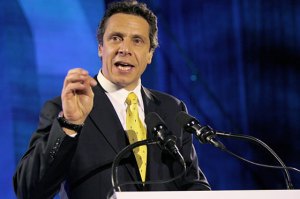 Andrew Cuomo loves boxing so much that he has a boxing equipped gym in his house with weights. He also jogs for around 2 to 3 hours a week. And Cuomo also likes to share his passion for physical fitness with the people who elected him. As the father of three girls who participate in soccer and track, he officially made Sept. 26 Women’s Health and Fitness Day in New York State!

Perry often touts the importance of fitness and notes the cost to states and companies of obesity-related ailments. He is also an avid promoter of fitness by example, he has ran in countless fun runs and marathons across the state of Texas during his tenure as Governor. He also runs almost daily around his home in Austin, and complained that when he had back surgery in 2011 and was unable to exercise regularly- he developed sleep apnea, which had been under control with his healthy lifestyle previously.

Earl Ray Tomblin has partnered with fitness legend Jake Steinfeld (“Body by Jake”) on The National Foundation for Governors’ Fitness Councils in order to build a nation of the fittest, healthiest kids in the world. His own site states that physical activity and exercise are shown to help prevent and treat more than 40 chronic diseases, enhance individual health and quality of life and reduce health care costs. In schools, studies show that physical activity improves academic achievement, increases confidence and self-esteem, reduces discipline problems, cuts absenteeism and fosters better interpersonal relationships. Tomblin himself has said “I’ve always said that academics and fitness go hand in and hand and believe that if you provide the schools with the tools, students will excel beyond their wildest dreams. Not only will these students be healthier, but they’ll also have increased confidence, improved self-esteem and will achieve greater academic success.”

In 2013, Chris Christie announced that he needed to lose weight and get healthy for his family- and decided to get a lap-band procedure done. Health Fitness Revolution does not recommend anyone to get lap-band but we are reporting Governor’s Christie’s story. Since then, he has lost close to 100 pounds and says that fitness has become a part of his daily life. We put Governor Christie on this list because we feel he is a good example to those American’s that struggle with their weight- that no matter how daunting a lifestyle change might seem- it can be done! He trains three times a week with his fitness trainer- who he often thanks in his public speeches and press releases.

Jay Inslee is a known avid basketball player and has even played against Barack Obama at the White House. To stay active, he says he also enjoys biking, skiing and hiking. Inslee also participates in the annual congressional baseball game and is a charter member of the Hoopaholics camp, a basketball charity that raises money for abused and neglected children. Athletics for Inslee, it seems, serve as a cure for a slow litigation process in Washington D.C. Inslee recognizes that we need to look more broadly at the overall structure of wellness and prevention – healthy habits, healthy diet and a commitment to fitness. He states that these are the true elements of building a healthier state workforce- so he signed a bill that requires healthful food and beverages in vending machines, cafeterias and on-site retail shops, at meetings and events, and in institutions where food is served to prisoners or other people in state custody.

In 2012, when Governor Deal learned that children aged between 10-17 in Georgia had the second highest obesity rate (40%), he decided to do something about it. That year, partnered with the Georgia Department of Public Health and launched Georgia SHAPE, a statewide program merging governmental, philanthropic and academic and business communities to address childhood obesity. Nathan Deal has said “We must work together to improve the health of children in our state. Some suggest that we’re raising the first generation of American kids to have shorter life expectancy then their parents because of problems related to obesity. We can and will do better to promote healthy lifestyles.” We appreciate that Governor Deal acknowledges that childhood obesity has serious immediate and long-term effects not only on health and well-being, but also on the academic achievement of children and the economy of his state.

In 2012, Governor Chris Christie called Jerry Brown an “old retread” which the California governor did not appreciate- so he challenged him to a fitness test! The then 74-year old Jerry Brown said “Not as much hair, I’m slowed down a little bit. But I have to tell you, I ran three miles in 29 minutes two nights ago … and I hereby challenge Gov. Christie to a three-mile race, a pushup contest and a chin-up contest. And whatever he wants to bet, I have no doubt of the outcome.”  The now 76-year old is no stranger to impromptu displays of strength. Four years ago he challenged a reporter to do 11 chin-ups, then did 12 himself! He also cares about the fitness of kids in California and has also partnered with Jake Steinfeld’s Governor’s Council on Physical Fitness and Sports to award schools that are demonstrating positive impact on the physical activity, fitness levels and well-being of California children.

In 2011, Governor Scott launched a Wellness Challenge in his state that recognizes schools making a positive difference in the lives of Florida’s students by promoting fitness, wellness and a healthier lifestyle. He said “I believe that healthy bodies are linked to healthy minds. Physical activity and education, along with balanced nutrition, are the tools that give school children the strength and focus they need to succeed in the classroom.”  He continues ““Fitness and nutrition are strongly linked to healthy minds. As we work to provide our students a good education, it is important to also teach them how to fuel their bodies and minds through balanced diets and physical activity. These tools will allow Florida’s children to succeed not only in the classroom, but also throughout their lives.”

In 2001, Governor Pat Quinn walked from the Mississippi River to Lake Michigan to call for decent health care for all. In 2012, he announced the “Walk Across Illinois Challenge,” an initiative to help improve the health and wellness of Illinois residents. Today, the Walk Across Illinois Challenge covers 190 miles and encourages everyone from youth to senior citizens to walk. That same year, Governor Quinn announced in the creation of the Governor’s Council on Health and Physical Fitness to develop practical ideas to help residents embrace healthier lifestyles. This council is charged with promoting a statewide response to prevent chronic disease brought on by poor nutrition and a lack of physical fitness. Pat Quinn aims to promote lifelong physical activity and healthy eating practices because he has said “The best preventative medicine is a healthy lifestyle.” Healthy lifestyle has been shown to contribute to healthy weight, prevent or improve most chronic diseases and increase longevity.

In his state of address after his inauguration in 2012, Governor Bryant said this on the need for fitness in Mississippi: “As citizens, we must do a better job with our individual healthcare. Every Mississippian should realize that a sound diet and exercise program will save lives and reduce health care costs. We should not be the most obese state in the nation, leading the worst statistics of heart attacks and strokes. Walk, run, go to the gym, plant a garden or ride a bike. Getting active is key to your own health care and I again intend to lead by example.” He also invited the people of Mississippi to join him at his “5K Governor’s Run for Health” which he aims to host every summer during his tenure. Bryant believes each of us has to take responsibility for our personal health, and that a family run is a great way for people to get active and improve their wellbeing.

10 Ways to Treat a UTI Naturally